An open data stream (ODS) is a channel through which you can send specified metric data from a sensor to an external, third-party system. For example, you might want to store or analyze metric data with a remote tool, such as Splunk, MongoDB, or Amazon Web Services (AWS).

You configure an ODS target through the Administration settings, which requires a user account with unlimited privileges. You can configure up to 16 ODS connections for each of the following target types:

The Open Data Streams page in the Administration settings displays configured targets organized by type similar to the following figure:

Each target displays the specified configuration settings and enables you to check the connection status, and edit or delete the target.

Status
The Status column displays "OK" if the ExtraHop system is able to connect to the target. Otherwise the status is "Error" or "Offline". 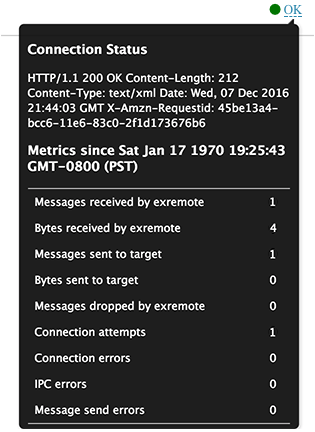 Requests from an ODS trigger to transmit data to the target are asynchronous; there is no support for processing responses to verify the success of a request. The connection details can help you check that the ODS trigger is running and that data is successfully transmitted.

Edit
You can edit any of the target settings except the target name. Because the target name is referenced by the trigger that specifies what data to send through the open data stream, this restriction reduces errors.
Delete
When you delete a target, it is important to also delete or inactivate the correlating ODS trigger; otherwise, the trigger continues to run and consume resources.