In the following procedures, you will deploy Reveal(x) 360 sensors and mirror traffic from a source ENI attached to your EC2 instances to a target ENI that is attached to the sensor.

If your AWS workloads are in a single Availability Zone (AZ), you can mirror traffic from the subnets in that AZ to the ExtraHop sensor without incurring data transfer costs. 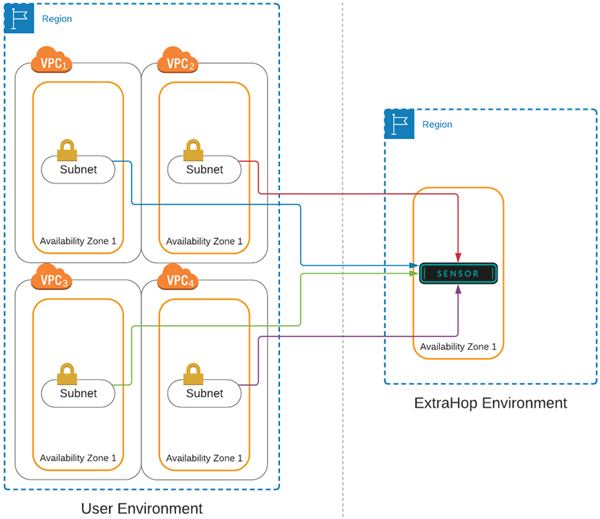 Your tenant ID is required to create an IAM role and to tag your ENI resources in AWS. Retrieve the ID from the Reveal(x) 360 Administration page by completing the following steps.

You must create an ENI for each subnet in your VPC that you want to monitor with Reveal(x) 360. A single Reveal(x) 360 sensor can only monitor ENIs from one availability zone.

Create an IAM role in AWS

The IAM role enables you to grant ExtraHop access to the traffic mirror targets you created in AWS.

Add your AWS account information to the ExtraHop system to enable the discovery of mirror target interfaces.

After tagging your target ENIs in AWS, you must scan for them in Reveal(x) 360 before they can be attached to your sensor.

You are now ready to add sensors from the Reveal(x) 360 Administration page.

When the sensor status changes from Pending to Running, you can view metrics, detections, and records for your AWS traffic in Reveal(x) 360 by clicking Reveal(x) 360 Console on the Administration page.

Complete these steps for each ENI you created.

For more information, see the following AWS documentation: Getting started with Traffic Mirroring.
Note the Target ID for each ENI. You will need the ID when you create a traffic mirror session.

You must create a filter to allow or restrict traffic from your ENI traffic mirror sources to Reveal(x) 360. We recommend the following filtering rules to help avoid mirroring duplicate frames from peer EC2 instances that are in a single VPC to the Reveal(x) 360 sensor.

For more information, see the following AWS documentation: Getting started with Traffic Mirroring.

You must create a session for each AWS resource that you want to monitor with Reveal(x) 360. You can create a maximum of 500 traffic mirror sessions per sensor.

For more information, see the following AWS documentation: Getting started with Traffic Mirroring.

It can take a few minutes for your traffic to appear in the system.
Published 2023-01-25