A geomap is a visual representation of worldwide activity based on a single count metric. The ExtraHop system determines the originating IP address of each metric event and plots it to a regional data point on the geomap. 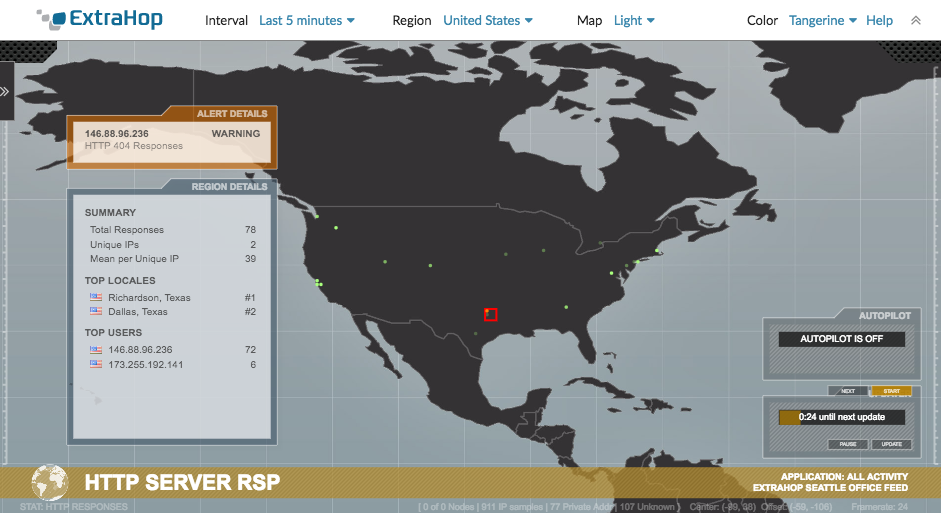 Generate a geomap on-the-fly from a metric detail page. You can only generate geomaps for count metrics that can be broken down by an IP address.

A metric tracked on a geomap displays a data point for each location from where metric data originates. For example, assign an SSH session metric to a geomap to find out if SSH attempts are coming from unauthorized locations. Each data point displays the IP addresses that sent the requests. Click a data point to view the following regional activity details:

A metric tracked on a geomap might be associated with one or more alerts. If the metric activity meets alert conditions, the appearance of the data point indicates the severity level. Alert severity levels are represented by the following colors on the geomap:

For example, if an alert is configured to watch HTTP responses on a group of web servers so that any time the ratio of errors exceeds 5%, a critical-level notification is sent. If your geomap tracks HTTP responses on the same web servers, data points display as red with spinning edges in each region the alert condition is met.

Click a data point to view the following alert details:

Each geomap displays the following information and controls:

Display controls
Settings that determine the look of the geomap and the time range of the data displayed.
Activity graphs
Graphs that display user activity in smaller data sets.
Autopilot
A feature that automatically navigates between the top eight regions with the most user activity.
Updater
A timer that counts down to the next refresh of the data on the geomap.

For more information about geomaps, see the Geomaps FAQ.